Traditional tales, from across the globe are given The Phoenix treatment in this gem of a graphic novel. It’s no surprise it’s been nominated for the Blue Peter Book Award this year.

From Mi’kmao we have the tale of the great warrior, Strong Wind, and Little Scab.

The Gifts of Wali Dad from the Punjab, tells of a poor grass cutter who values virtue over wealth.

The old Romani tale of Lucky Jim and the Golden Hair of the Sun, tells of a wicked king who thinks he can cheat Fate.

Two Merchants, from the lost kingdom of Kanem-Bornu is a tale of cheating and justice.

The Picture Wife from Japan, my personal favourite, tells the tale of how a poor peach farmer becomes the king.

From Brazil, we have the story of Why the Sea Moans.

The Snow Daughter from Russia tells the tale of a poor old couple with no children.

And finally, from Scotland, we have Riben, Robin and Donald McDonald, a story of greed and nasty neighbours.

The collection is a magical mix of myths, none of which you will have ever heard before. 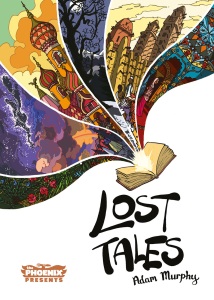 Great for fans of myths, legends, comics and The Phoenix.

One thought on “Lost Tales by Adam Murphy”