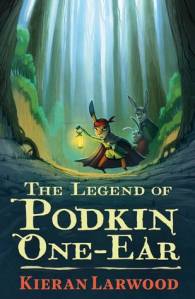 It’s the Eve of Bramblemas when the old bard arrives at Thornwood Warren. The young rabbits are desperate for a tale and the wandering storyteller settles on The Legend Of Podkin One-Ear. But, this isn’t the version with fiery eyes or giants – this version is far closer to the truth.

And so begins the tale when, years before, also on a Bramblemas Eve, the evil Gorm arrived at Munbury Warren. The chieftain’s children, Pax, Podkin and Pook are smuggled out of the warren before they can be killed or captured, and find themselves catapulted into a dark and dangerous new life, on the run from a foe that wants to destroy them. How can an untrained and unprepared bunny-chief, as Podkin now is, protect what remains of his family?

A wonderfully told tale of adventure and adversity, packed with courage, heart and hope. Kieran Larwood has created a rich fantasy world in a time long after humans have left the world, complete with it’s own religions, superstitions and traditions. The bard enables him to switch effortlessly between Podkin’s tale and snippets of history that the listening rabbits (and the reader) need to fully understand his version of events.

Podkin grows throughout the story, as he and his siblings struggle to outrun their pursuers and find safety, while his sister, Pax, is his strength when he can’t find his own. The other characters are well-rounded, and all add to the siblings growth, with Brindle and Crom both wise guides for the young rabbits on their journey. The Gorm are terrifying foes, seemingly undefeatable and utterly lacking in compassion, which younger readers may find a little upsetting.

David Wyatt’s stunning interior illustrations, brimming with intricate details, bring the rabbits and warrens of the Five Realms of Lanica to life. 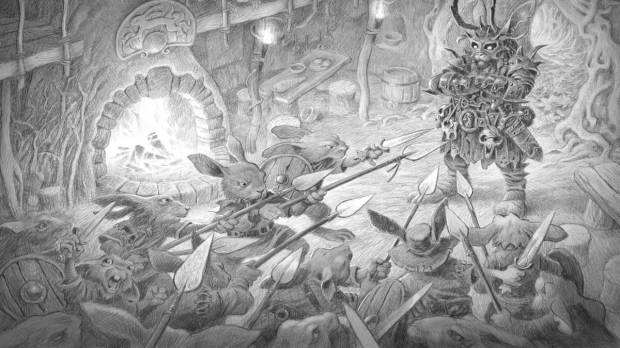 Great for fans of Varjak Paw, Sky Song and Watership Down.