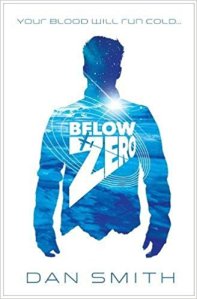 In the frozen depths of Antarctica, at Outpost Zero, thirty two people from the Exodus Project are preparing for life on Mars. They are joined by scientists from BioMesa, but no one knows why they are there.

Zak and his family had been enjoying a holiday on the sun drenched island of St Lucia, when his parents received a call asking them to head to Outpost Zero to fix their Spiders which are malfunctioning. As the plane begins it’s descent, they are caught in a storm, and the landing lights are out. Crash landing in one of the most isolated spots on Earth would be bad enough, but Outpost Zero is in darkness, and it’s inhabitants have disappeared.

Zak isn’t sure whether the visions that began when they arrived are real or a product of his illness, but what he does know it that he and his family are in terrible danger…

Action, suspense and sci-fi are combined to create a nail-biting thriller that chills you to the bone. Zak, and his sister, May, are brave and resourceful, yet it’s his vulnerability and empathy that have you rooting for them to survive the horrors that lie in wait within the frozen base, and beyond.

Artificial Intelligence, DNA and adaptation are all deftly weaved into the fast paced story that had me reaching for my cushion of comfort in a bid to save my nails. Below Zero proves, once again, why Dan Smith is, for me, the master of middle grade action, whether it’s sci-fi or historical fiction.

Great for fans of The Inventory: Iron Fist, Jimmy Coates: Killer, and A Wrinkle In Time.

4 thoughts on “Below Zero by Dan Smith”