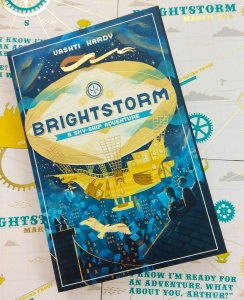 I was delighted to receive an early review copy of Brightstorm. Within the shiny gold silver envelope, I knew an adventure awaited, but an adventure with a map? Oh wow! Before turning a page, I was able to begin the immersion into a whole new world.

And then I started reading…

Maudie and Arthur Brightstorm are waiting for their father to return from his latest expedition – a race to South Polaris. When the Violetta fails to return, they learn that not only is their father dead, but he stole fuel before he died, contravening the Explorer’s Code, and leaving them homeless and penniless.

Determined to clear their family name and find out what really happened to their father, they apply to crew on a new airship, captained by Harriet Culpepper. Along with the rest of the crew, Maudie and Arthur are off on a race to find not only South Polaris, but the truth about their father too.

Stunning scenery, eccentric characters and a plot that never lets up combine to create a riveting read that I could not put down. Brightstorm made me laugh, and cry, with the young explorers as their sky-ship carried them from the heat of the Second Continent to the frozen Third Continent, aboard The Aurora with it’s crew that come together like family around the Brightstorm children.

I was utterly enthralled with the world Vashti Hardy created, and it’s inhabitants. Like Arthur, I took an instant shine to Felicity Wiggety, who proves categorically that tea can fix most things. I long for a sapient of my own, and even just a pinch of Maudie’s engineering expertise would be good. I loved the inclusion of STEM and environmental issues that slipped seamlessly into the story.

A dazzling debut! I really hope we get to go on more adventures with Maudie, Arthur and the crew of The Aurora. I’m certain Eudora Vane hasn’t finished with them yet…

Great for fans of Cogheart, Ned’s Circus Of Marvels, The Uncommoners and Sky Chasers.

WMany thanks to Scholastic for my proof for review.

One thought on “Brightstorm: A Sky-Ship Adventure by Vashti Hardy”