I am delighted to welcome P.G. Bell, author of The Train To Impossible Places, to my blog today to talk about writing characters, good and bad…

When I first sat down to write The Train To Impossible Places, I was determined that it wouldn’t have a villain. After all, I reasoned, if Hiyao Miyazaki could get away without one in films like My Neighbour Totoro and Kiki’s Delivery Service, why couldn’t I?

“Stop trying to be clever,” my agent told me. “You need a villain.”

She was right, of course.

Bad guys don’t have to worry about social niceties. They get to stride around behaving outrageously, saying whatever they think and stamping their mark on the world. Best of all, at the end of the story they (usually) end up facing justice, to remind us that such behaviour is not (usually) supposed to pay. It’s cathartic.

That’s why Lady Crepuscula, the main antagonist in The Train To Impossible Places, was so much fun to write. She’s a powerful sorceress who doesn’t care a jot about being liked, and takes her pleasure from inconveniencing others.

But then there’s another, more insidious sort of baddie: the sort who doesn’t think they’re bad at all. They may even think they’re a force for good, if they happen to believe that good and evil are real things that actually matter. Some of them don’t, and they’re the ones you really need to watch out for, because you often can’t see them coming until it’s too late.

You’ll find both sorts of baddie in The Train To Impossible Places.

But who will stand against them? Why, our heroes of course! Although I should point out that they’re not heroes when we first meet them; they just want to keep their heads down and get on with their day jobs. Why are they so reluctant?

Because reading about an ordinary person who grows into a hero is far more interesting than the exploits of a hero who’s ready-made. Take the book’s main character Suzy, for instance: an eleven year old science geek, stuck in her second-best pair of pyjamas. Hardly the stuff of legend.

She’s brave though, and that’s what counts. Not unafraid – she gets very scared indeed at times, and rightly so – but bravery isn’t the absence of fear, it’s about being afraid and choosing to do the right thing anyway. That’s what Suzy does. Or tries to, at any rate. She doesn’t always get it right, but she never acts cynically or selfishly.

And in the end, that’s the true dividing line between goodies and baddies – the line between compassion and selfishness. Goodies put others before themselves. Baddies put themselves before all others.

Always try and be a goodie. It’s harder in real life than in fiction, but our need is so much greater.

Thank you so much Peter for this fantastic guest post.

The Train to Impossible Places by P.G. Bell with glorious illustrations from Flavia Sorrentino, is out now in hardback, from all good bookshops. You can read my review here. 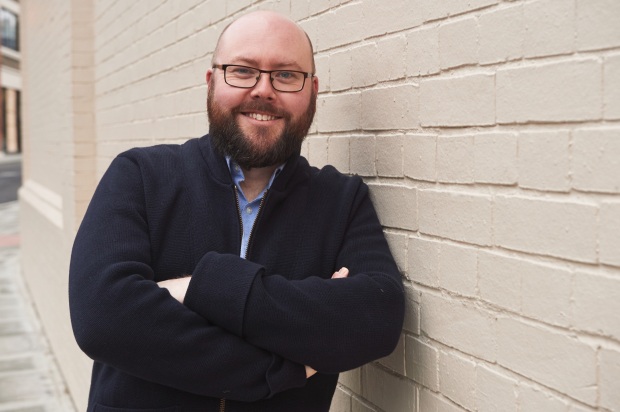 A native of south Wales, P.G. Bell was raised on a diet of Greek mythology, ghost stories and Doctor Who. He’s had all sorts of jobs over the years, from lifeguard to roller coaster operator, but all he’s ever really wanted to do is write stories for a living. And now he does! Peter still lives in Wales, still enjoys mythology, ghost stories and Doctor Who, but now gets to share them with his wife Anna and their two children. You can find out more about P.G. Bell at his website, and follow him on twitter @petergbell.

Huge thanks to Fritha and Usborne for inviting me to take part in the blog tour for The Train To Impossible Places. Do make sure you check out all of the other stops.