It’s February 1666 and London is being ravaged by The Plague. Sam and his brother are sent out of their home in the middle of the night to seek refuge with Father Stephen. They aren’t every able to say goodbye to their mother who lies coughing and sneezing in bed…

Several months later, we catch up with Sam, orphaned and alone on the streets of London desperate for food. He narrowly avoids being caught thieving thanks to help from Wilf, who then takes him to meet Uncle Jack in Pudding Lane, where he joins his band of little magpies. With a bed at night, food twice a day and a friend in Catherine, maybe life as a thief isn’t so bad. Then, a strong wind and an oven full of embers change everything. With a fire tearing through the streets of London, Sam and Catherine decide they’ll do one final job for Uncle Jack. Only then do they discover the lengths he will go to for gold. Can they outrun both the fire and Uncle Jack?

With characters that have you routing for them from the off, and a scorching description of the fire beginning on Pudding Lane to it’s spread across London, this is an action packed, gripping, historical adventure. A testament to the strength of true friendship, our heroes have bucket loads of courage, bravery and tenacity in the face of an evil, manipulative foe.

Jonathan brings the devastating horror of the Great Fire to life perfectly for children making this a brilliant book for use on topics covering The Plague and The Great Fire of London, and to draw comparisons between Sam and Uncle Jack, and Oliver Twist and Fagin. 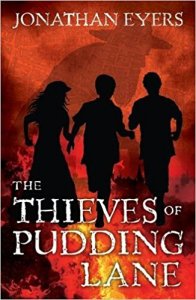 Many thanks to Jonathan Eyers for sending me a copy for my bookshelf at school; I’m sure my pupils will be as gripped as I was.

4 thoughts on “The Thieves of Pudding Lane by Jonathan Eyers”